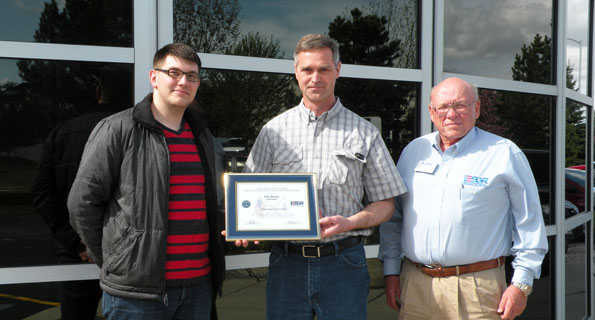 The Pro Patria award is for employers and supervisors who go out of their way to support employees serving in the National Guard and Reserve. Rosine was nominated for the award by Nathan Rees, Guardsman and Team Lead for the Clean Room at EmbedTek.

Like many Wisconsin firms, EmbedTek depends on a skilled workforce to meet a tight production schedule. There were several occasions where Rees’ duties as a Signal Support Specialist interrupted his job at EmbedTek.

Rees explained “In the Guard, I am a Signal Support Specialist. My duties are to establish and maintain FM and satellite communications and BFT (Blue Force Tracker) systems at the battalion level. I sometimes had to leave EmbedTek early to help set up for weekend training exercises, and John was able to work around my absence.”

As an employer, EmbedTek had to make up for the missing worker by adjusting production schedules, asking other employees to fill in, and by overtime. Rosine was instrumental in ensuring that promised delivery times were met and customers were not inconvenienced.

EmbedTek designs and manufactures single-purpose computers and digital displays for original equipment manufacturers. EmbedTek products are found in a range of other devices, from fitness equipment and medical devices to surveillance systems and training simulators.

The award was presented to Rosine by Col. (Ret) Tim Pfang of the ESGR (Employer Support of the Guard and Reserve). The mission of the ESGR is to recognize the efforts of employers to protect the jobs of employees who are in the Guard and Armed Forces Reserve. Further details at www.esgr.mil.

Preventing a COVID Super Spread In the Workplace.