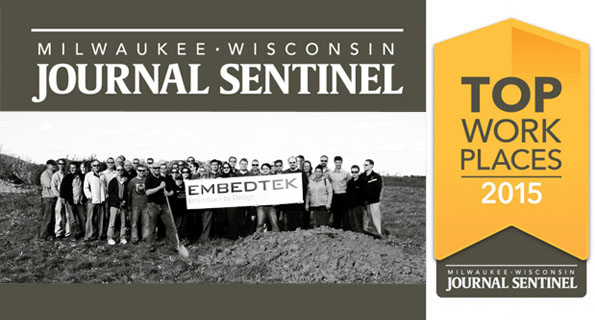 Hartland, WI. – EmbedTek has been recognized as a 2015 Top Workplace in the Milwaukee Journal Sentinel’s sixth annual Top Workplaces ranking of the best places to work in southeastern Wisconsin.

This year 1,327 companies in southeastern Wisconsin were invited to participate. Surveys asked more than 67,000 employees about their jobs and paychecks, their managers, their outlook for the future – everything that makes for an exceptional workplace.

EmbedTek’s 75 employees responded through a combination of online and mail-in questionnaires. Their stand-out responses highlighted confidence in EmbedTek management and a belief that the company was headed in the right direction.

One employee reported: “I’m extremely excited about the fact that EmbedTek has shown consistent growth over the last couple of years. I feel proud to be a part of a growing company/team.”

EmbedTek, founded in 2002, makes computers that go into other devices: medical systems, training and computer simulators, video surveillance systems, even fitness equipment. The firm recently announced that it would be ‘onshoring’ $10M worth of products formerly made by Asian companies. EmbedTek is currently based in Hartland, Wisconsin, but will move to a new Pewaukee location in August of this year.